My daughter started school back in September and, since doing so, her love of reading has grown exponentially. Now that she has started learning to read to herself, there’s no stopping her. Her school has started sending some simple books home for her, and her classmates, to learn with. The problem is, these books are a little too basic for her, because currently they only have one word per page, and she was keen to try more.

As is always the case when I need something, my first port of call was Amazon, but this proved to be a fruitless exercise. Given that Amazon started life as a book store, it’s surprisingly bad to use when trying to find a book in 2018. I quickly gave up on this idea.

I moved onto Plan B.

This will likely come as a shock to you, but I adore my iPad and when I get a chance to use it for yet another task I’m a happy camper so I thought that it may just be easier to try and make something myself …

Now, I should start by saying that J.K.Rowling has nothing to worry about when it comes to my book writing ability. This isn’t a post to brag about how I’ve become a skilled novel writer overnight, it’s more about highlighting another fun thing you might enjoy using your iPad (or iPhone for that matter) for.

There are multiple ways of achieving the end result here, I’m sure, but when creating my master piece I took advantage of the following apps:

First things first, I used Pages as a basic tool for creating the basic design of the book. I’m not entirely sure how long they’ve been there, but the current version of Pages on iOS already has nine basic book templates to choose from. One of them, simply called ‘Story’, is already a basic children’s book, which is useful!

After loading up the Story template, I removed the placeholder text and began crafting my manuscript. This was, again, made for a four year old, so it’s no War and Peace … 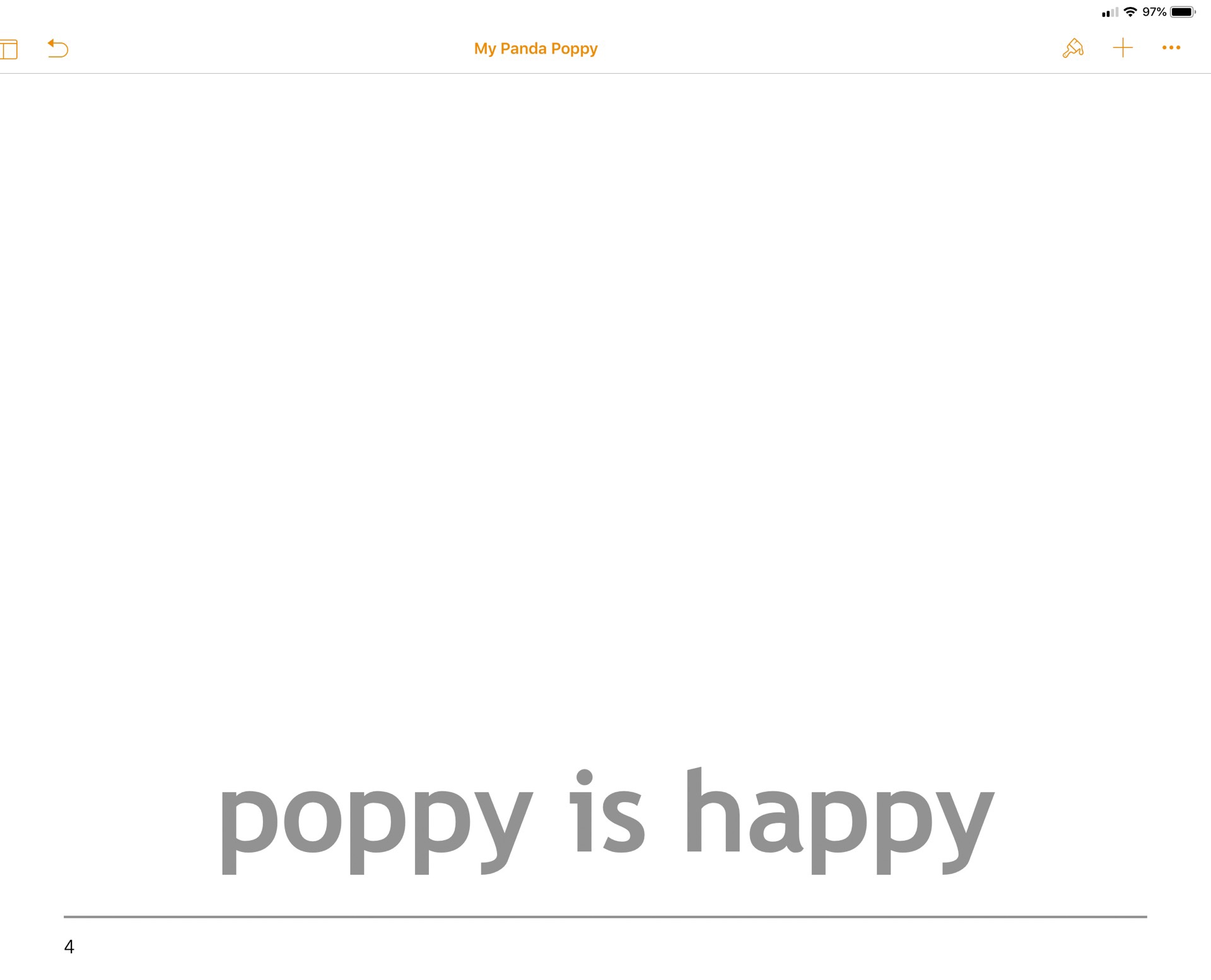 I duplicated each page, to keep the formatting the same, and just updated the content. All simple stuff so far, though it was obviously looking pretty bland. Given the target audience for the book, a bit of art was needed. I included the disclaimer above regarding my lack of novel writing prowess, but I’m afraid I am now going to have to include another. I cannot draw to save my life. This will be clear once you see what comes next.

A quick search on DuckDuckGo (yep, I’m a search engine hipster) and I’d found some great images to be the star of my book, Poppy. Given I will, clearly, not be selling the finished article, I was essentially free to grab a few images that I needed.

Once I had my images, I imported them into the excellent Pixelmator for the simple task of cropping out the background, leaving me with a clean image ready to use.

Next up, the newly cropped image was copied to my iPad clipboard and I moved onto Linea Sketch to paste it into a new canvas to create the scene for the book. Linea is a really great app which is both simple, and powerful, at the same time. It’s in no way as powerful as something like Photoshop, but it’s not trying to be. Its main function is for drawing, but it does also include some basic laying functionality which was ideal for my needs. The panda images, which you can see below, were simply pasted from Pixelmator into a Linea canvas and I then added new layers for the background colour and then more for other things I needed to either also copy in, or draw, like the microphone (which was pasted in) or the expertly drawn hat.

Once done, I had a selection of images that fit with the text I wrote early so I, once again, jumped back over to Pages to finalise things. I opened both Pages, and Linea, in a multitasking view and copied each separate Linea canvas and simply pasted the image directly into each page of the book. After a little dragging around to line things up, it was essentially done.

As a final little cherry on the top, I exported my creation out of Pages, into Apple Books, as an ePub for my daughter and I to enjoy at bed time. 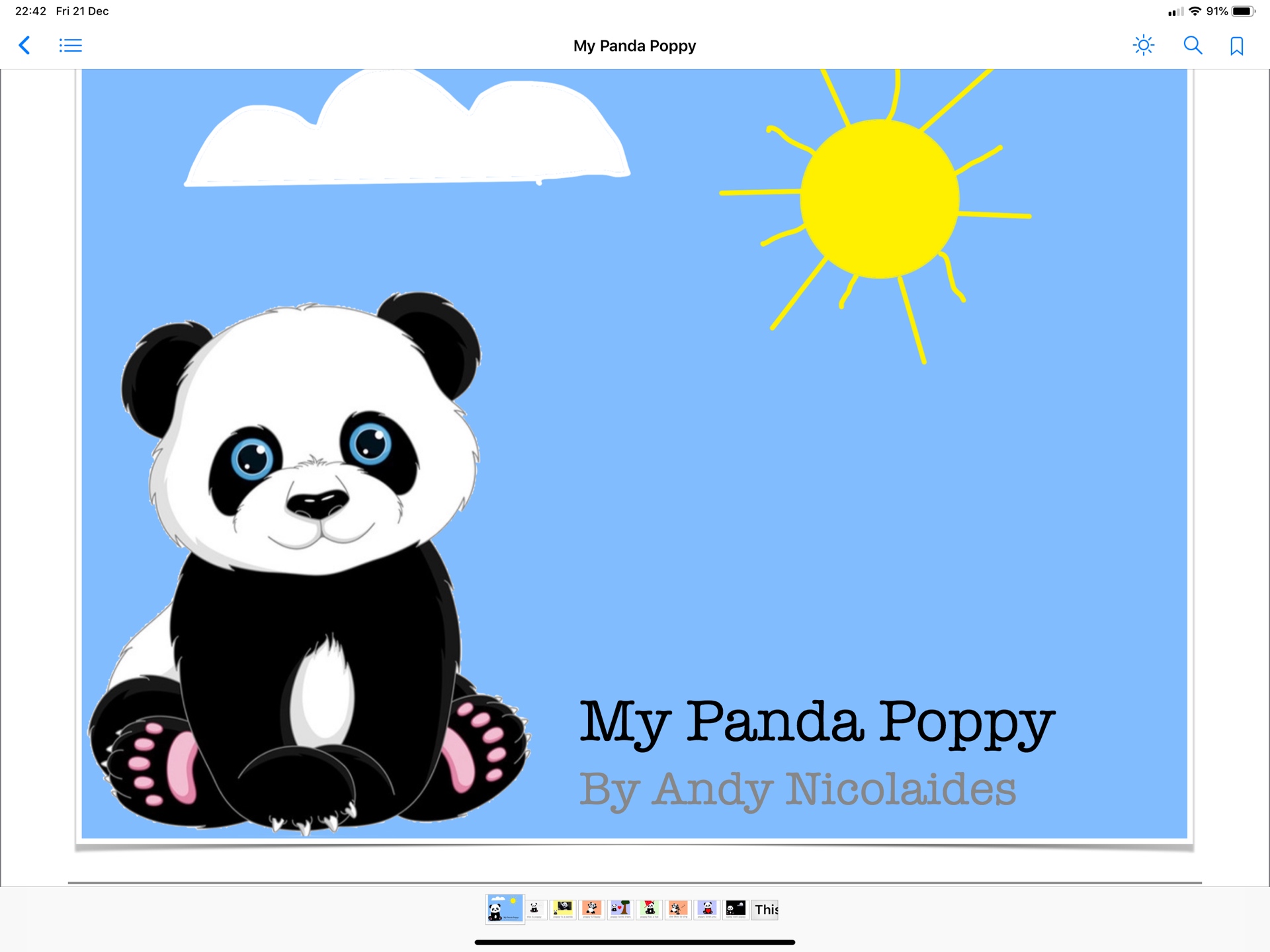 Generally speaking, my daughter doesn’t use an iPad much, especially at bed time, but on this occasion we did take the new story for a spin and it went down very well. She was able to read something herself that stretched her more and I had the satisfaction of both being able to give her what she wanted, whilst also getting even more use out of my iPad. The above process took about thirty to forty minutes to complete, at most, yet I’m pleased with the results. The book itself, on it’s own, looks pretty hideous, I know, but the fact I was able to make it so quickly was great, and the actual look was largely irrelevant to a child that just wanted to have some fun reading.

I can see a lot of potential for taking this idea further down the road, where we can maybe write and illustrate the book together next time. I’ll be sure to share some details of our next best seller as and when the big launch comes around next!

For now, however, you can breath easy J.K. your crown is safe.