I’ve previously mentioned, in my post about getting things done on the iPad, that one of the main factors in making the move to an iPad as my primary computer was space. Or lack thereof. This particular issue changed for me, about a year ago, and I’ve since setup a cosy little working space for myself in one of our spare rooms. While the room is, admittedly, pretty horrendous for podcasting (I literally have to cover myself with a blanket when I record …), it’s a great area for getting other tasks done.

I posted a couple of shots on Twitter a few days ago of my current setup, which seemed to get quite a bit of interest. I know I, also, really enjoy seeing, and hearing about, different people’s setups so I thought I’d go into a little more detail about what I’m using currently.

I’ll start with the most used item first, which is of course the iPad Pro. Essentially everything else on the desk is there to support or enhance my usage of the iPad. 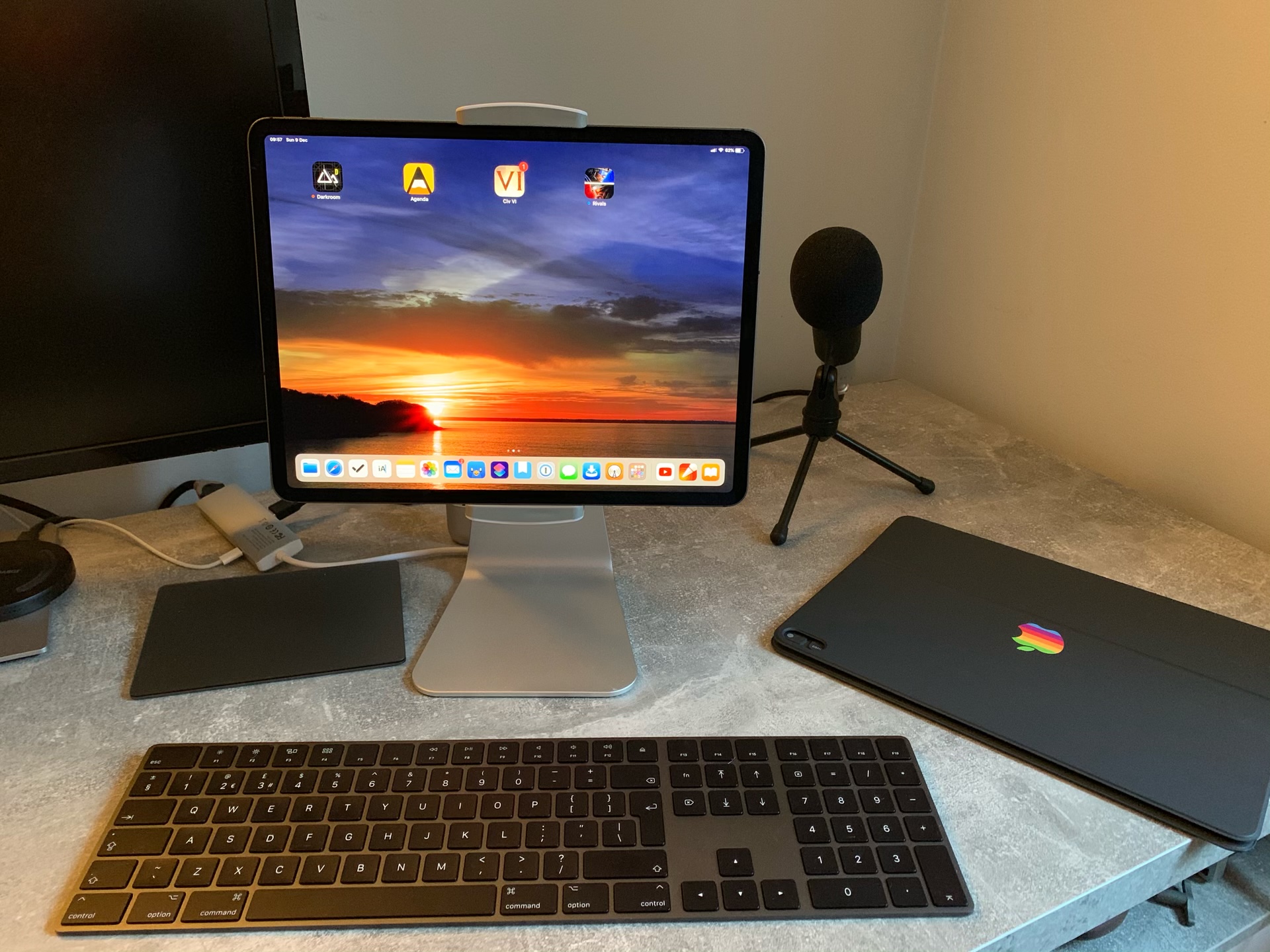 The iPad itself is the 12.9” iPad Pro (2018). As I mentioned during my review, one of the reasons for moving up to the 12.9”, from the 10.5”, was so that I could use the device on the desk more, and it hasn’t disappointed. I’ve seen a lot of people, quite fairly, saying that the 12.9” is, despite the body size reducation, far too big of using away from a desk. I, personally, disagree with this, and find it very comfortable in any position or circumstance I can throw at it. It is, however, so very nice on a desk. I will refrain from gushing over the device too much more, however …

When I’m using the iPad away from my desk, I use the Apple Smart Keyboard Folio. This accessory has had some negative reviews, given its pretty crazily high price point, but for me it’s as much a part of the iPad Pro as anything else. I’ve never been big into large, noisy, mechanical keyboards, so the low profile really fits my use case and preferences very well. It’s a joy to use, and I like that it now covers the entire device.

In a very un-Apple like move, the Smart Keyboard Folio has absolutely no Apple logo across the entire product. While it makes the device very clean and minimalist looking, it is extremely boring. I’ve never been a big fan of putting stickers on my devices, even accessories, but the Folio is just so dull I had to give in. I saw Daryl Baxter tweeting about some retro 6 colours Apple logo stickers he’d recently purchased so I picked up a set from Amazon. Once received, I placed the sticker on the back of the Smart Keyboard Folio, in the orientation Apple themselves should add logos to iPad devices, in landscape.

When I’m sat at my desk, particularly for some writing, I will switch things up a little. I place the iPad itself in a smart little stand, the AboveTEK Elegant Aluminium iPad Pro Stand (catchy name!) which I highly recommend. The stand comes with 2 clamp like attachments, one for each iPad size, which can be swapped out without too much hassle, should you need to. If, like me, you treat your technology with kid gloves, you’ll be happy to know the clamp itself has some soft, rubberised, padding inside, so it feels secure, yet gentle, when holding the iPad.

The stand itself looks very much like the foot of the iMac, which is another nice touch. Like the iMac, this base is nicely weighted, so even when you’re pressing on the screen it feels very secure. The clamp can be tilted back and forth for better viewing angles, and can even twist so you can use the device in different orientations, if needed. The only down side, which is pretty minimal, is that the way the stand holds the iPad, you can no longer connect, or charge, the Apple Pencil. Luckily, I have a solution for that too! Back when I had the first generation Apple Pencil I would often find myself nowhere to put, or store, the device, so I picked up little accessory called the Belkin Stand for Apple Pencil. Despite the fact I now have a home for my Apple Pencil 99% of the time, this little stand is still on hand for when the iPad is clamped into the stand.

Now that the iPad is comfortable in its snazzy stand, I can get on with getting things done. When using the iPad in this configuration I use the ‘Space Grey’ Apple Magic Keyboard with Numeric Keypad. There isn’t much more to say about this accessory, really, other than that I really love typing on it. The key travel is limited, which is exactly what I want, and you can’t deny that it looks rather pretty …

The podcasting setup you can see in the image above, along with the details behind this, was again detailed in my Getting Things Done on the iPad post, so feel free to check that out if you want some more information on this front.

Now that the iPad Pro has moved to a USB-C connector, I decided to fully embrace this, and grab a dongle which can take advantage of it a bit more. I picked up a Lenovo USB C Hub, after zero research online. It’s proved to be fairly competent, however, which I’m pleased about. With this, I can charge the iPad, connect my external microphone, connect an external monitor, among other things. I’ve been pretty happy with it so far.

As soon as I started getting my new office / study setup I decided that I wanted to get a 4k monitor on there. My initial rationale was that, despite external monitor support on the iPad being a little (very) half-baked, I thought it would be a good device to still connect to an iPad when watching films (which actually do take advantage of the screen). Beyond watching films, I will sometimes connect my iPad to the monitor when playing games, or even when writing if I need an even larger screen to work with, though this is less common to be honest.

As we all know, all work and no play makes anyone a dull boy, so I also have my old Xbox (which has been replaced by an Xbox One X) hidden away under the deks, which is also connected to the monitor (which has built in speakers) from when I need to unwind.

The Elephant In The Room

I can already hear the comments coming in about the little square device to the left of my desk:

Well, that is still true. When the study / office was ready, I was still using the 10.5” iPad Pro as my main device. The new models were still 6 months, or more, out, and I started to get itchy feet, so to speak, because I had already picked up the monitor. Cue an evening of some browsing of the Apple Store website and a little deep dive into the refurbed Mac section … I came away from that visit with a low end 2014 Mac Mini on order. When it arrived, I realised I’d made a terrible mistake.

The HDD on this old model was beyond showing its age. It literally took about 10 minutes to power up, and hung constantly. It was, essentially, unusable, especially when coming from an instant on, massively over-powered and quick iPad Pro. Not one to ever stop throwing good money after bad, I picked up an external SSD and enclosure and have since been running macOS off this. To be fair, this seemed to speed things up considerably, and it’s now far more usable. The issue is that, now that I’m so invested in iOS, I have almost nothing I would need a Mac for. Right now, and I kid you not, the Mac Mini is fired up once a month, when I get a new book from Audible, so I can download it, add it to iTunes, and then manually sync the file with my iPad and iPhone so I can listen to the book in Apple Books instead of the Audible app. Yep, that right there is £600 (for the Mac Mini + SSD + enclosure) well spent …

The light panels at the back of the room always get quite a good reception, whenever I share an image of my room, so I didn’t want to neglect detailing these a little also.

They are the Nanoleaf Light Panels. You can place them in any configuration you want, providing they are connected. Given that each separate panel is a triangle, your design choices are slightly more limited, but you can still come up with some interesting designs. The light panels are HomeKit compatible, which is a must for any Smart Home stuff I buy currently. You can colour each panel separately, if you wished, colour them all the same, or use some of the presets to produce a really nice, vivid, almost moving, texture across the entire set. I highly recommend these lights, particularly in a space like this. They really bring the room togehter!

So, that’s it! I’d love to see some of your own office setups, so please feel free to get in touch with me on Twitter with what you’re currently working with!