Whilst writing my iPad Pro review I had intended in going a little more in-depth about how I actually get things done on my iPad. I took umbrage to many of the main stream iPad reviews that were written by people that are clearly not regular iPad users, and haven’t really taken the time to learn iOS.

Matt Gemmell, in writing his iPad Pro review sums up this feeling perfectly:

Also, be extremely skeptical of anyone who makes a judgement about switching to an iPad when they haven’t actually done it themselves (this goes for most judgements about most things throughout life). This group includes the apparent majority of tech journalists, most of whom seem to have an annual ritual of spending one week with the newest iPad, and then saying it’s not a laptop replacement yet in some general sense. How would you even know? I certainly didn’t until six months or so in.

As my review progressed, going into too much detail about my own personal uses didn’t seem to fit at the time and started to feel that it would be more suitable as a separate post. So, here we are.

Before I dig into a few of my own use cases for an iPad Pro, I should clarify that I have replaced my personal computer with an iPad, since about 2014. I do, however, still use a Windows PC everyday at work. While the iPad doesn’t fully replace all computing in my life, it does touch on many facets, even in the work place.

As I’ve previously mentioned, I’ve been using an iPad as my primary computer since 2014. At the time, I believe this would have been the (still) fantastic iPad Air 2. I still have this Air 2 (though it had a screen issue which led to Apple giving me a fresh refurbished model about a year ago), though it’s now used by my daughter for some YouTube or kids games etc. The Air 2 enjoys its retirement I’m sure …

In 2014 my wife and I lived in a small house, with a spare room that was used as my home office / study. Within lived my 27” iMac. This was, at this time, my main computing device. Also at this time, I found out I was going to be a dad. This was, of course, amazing news, but my iMac didn’t agree. The iMac knew it’s time lording it up in my spare room was numbered. The room was quickly converted into a nursery and, after a short stint in the corner of the living room, was quickly retired.

I loved that iMac because it looked so pretty, but functionally I didn’t miss a thing, even then. I did very little (read nothing) on the device to warrant its existence. I didn’t admit that, however, until I had no choice but to let it go.

Since then, the functionality and utility of the iPad has grown as has my usage of it. As mentioned earlier, many iPad Pro reviews focused on what an iPad can’t do, many of which it can do, yet clearly on time has been exploring just how. To this end, I wanted to share a few instances of how I use an iPad to, in some small way, counteract the message that you can’t get things done on an iPad.

One of the easiest things to get done on the iPad, even prior to the Pro, was blogging. Since the Pro, however, this has become even easier. The Dent is currently hosted on Wordpress.com, and posting there via the web is, surprisingly, quite robust.

After trying out many, many writing apps over the years, with apps like Drafts and Ulysses being particular highlights, I’m currently using a bit of a classic, namely iAWriter. I’ve been using it again for a few weeks now and I’m really in love with the app. It does exactly what I was looking for in a writing app. The UI itself minimalist, and the Focus mode really helps you … well, focus! This mode dims the text you’ve already written, and keeps only the current word, line or paragraph (whichever you choose) brighter. You get the choice of a light and dark mode which is really important for a writing app in my book. One of the big selling points for Ulysses, according to many people, was the fact it can also post directly to Wordpress. Well, it turns out, so can iAWriter. Once you provide your credentials any post you write (including images) will be uploaded to your Wordpress site and saved as a Draft, ready for you to publish at your convenience. iAWriter is one of my favourite types of apps, in that on the face of it it’s very simple, yet once you dig in a little you find some really powerful features.

I currently host a short-form, podcast called The Dent and am also the co-host of a long running show called Pocket Sized Podcast. When it comes to The Dent’s companion show I record, edit and post entirely from the iPad alone. For Pocket Sized Podcast I record via the iPad, but the main host, Scott, does all of the great edit work.

For both shows I use the fantastic Ferrite to record my side of the conversation. I also use it to edit (what little editing I do) for The Dent. Ferrite is both a powerful audio recorder and multi-track editing tool which is just a powerhouse on the iPad Pro. The app features Pencil support as well, which is really invaluable when it comes to precise editing and manipulation for complex recordings. While his post is now a little dated, Jason Snell wrote an interesting piece about using Ferrite for podcasting on his blog, which is well worth checking out. 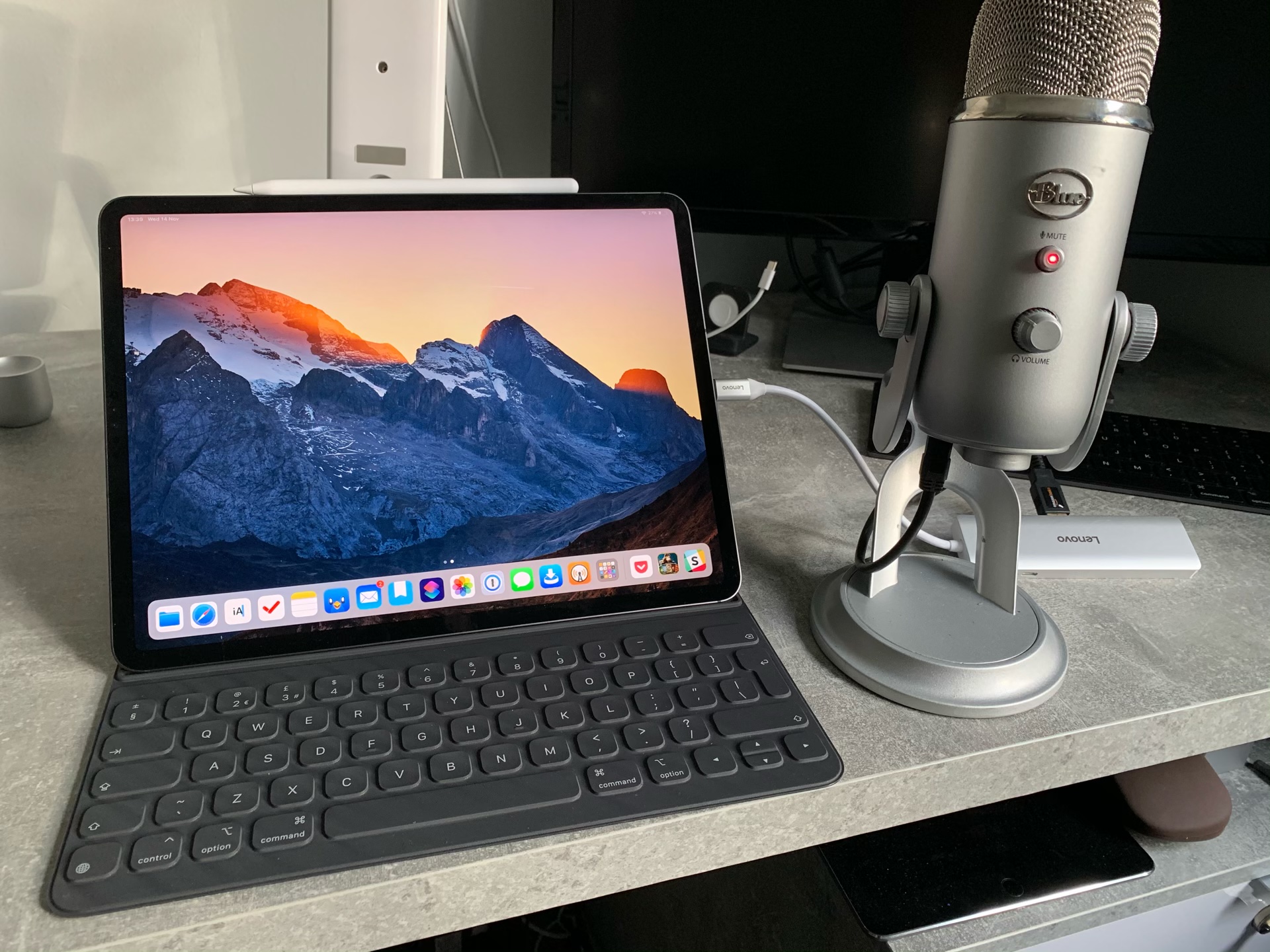 Recording and editing The Dent is easy because I am, essentially, talking to myself. For Pocket Sized Podcast, or other shows I’ve been a guest on the iPad alone isn’t enough, unfortunately. For this, I will need to use Skype or FaceTime Audio to complete the call to the other hosts. This, however, is still simple, though it is an extra step. On these occasions, I will simply hold the call on my iPhone, whilst recording into Ferrite as usual. This is a little bit of a cheat, I appreciate, but needs must, and I am still iOS focused at least …

Don’t worry, I don’t take photos with my iPad Pro. I do, however, really enjoy editing photos on my iPad Pro. Since my daughter came along I have, admittedly, taken less photos that actually need editing. I now take far more photos than ever, for obvious reasons (dogs and kids are cute it turns out) but I wouldn’t generally edit fun family snaps. When I do take photos that need editing, the iPad is my go-to, however. My favourite photo editing app is actually only available on the iPhone, unfortunately, and that is Darkroom. The good news, however, is that an iPad version is currently in beta and will hopefully be released soon.

One of the real highlights of editing photos on the iPad Pro comes from using apps like Pixelmator, in conjunction with the Pencil. The precision and power you get from combining these really is incredible. I certainly don’t push this particular workflow anywhere near it’s limits currently, but I’m looking forward to exploring it more over the coming months / years.

Okay, so classifying anything I currently do, or have done, with video as video production is most certainly pushing it. So far, I’ve uploaded just two videos to The Dent YouTube channel but both videos were recorded and editing using an iPad Pro and the fantastic LumaFusion. These videos are, essentially, experiments. Experiments designed to learn the ropes of a very powerful, professional grade bit of software. This blog, the podcast and now the YouTube channel are all experiments, to some extent. This is never going to be a profession for me, but it’s all good fun, and something I find relaxing to do (not to mention it lets me spend more time with my beloved iPad). If you want to see what some real professionals can do with the iPad Pro with LumaFusion, I can highly recommend the fantastic Chris Lawley’s entire YouTube channel which is completely produced from an iPad Pro. YouTuber Jonathan Morrison also released a fascinating video about his process behind producing another video entirely on the iPad Pro with LumaFusion. Jonathan is most certainly a professional, and he came away very impressed with what the iPad Pro could do.

While I included a caveat at the start of this article saying that my day job requires that I use a PC due to necessary software, that isn’t to say that the iPad Pro isn’t infiltrating my life even there.

I currently bring the iPad to work with me every day, and it sits by my side while I work. The iPad comes to meetings with me for note taking, or for marking up some ideas with the Pencil should they come up. I’m currently using the stock Notes app, after a foray into many other third party apps such as (the admittedly great) Bear. As with many stock Apple apps, I find the integration hard to ignore, especially when my requirements are fairly light at this point in time.

I also use the iPad to manage my time and tasks / projects as well. I’ve long held a misguided belief that I should be using the same apps across both iPhone and iPad. I really like Things 3 for work related tasks, but it was just too much for every day / personal use. To this end, I would often switch between Things 3 and GoodTask 3. I’ve now settled on a happy medium. I use Things 3 for work, mainly on the iPad (where it looks truly lovely) and GoodTask whilst at home. Happy times all around!

While everyone is ranting and raving about not being able to do real work on an iPad Pro, or if it can replace your laptop, they seem to be forgetting that you don’t actually need to have work tasks that you do on your personal laptop in order for an iPad Pro to replace your laptop. I’m firmly in the camp that you can do work on the iPad, but I also appreciate that most people don’t ever do work on their personal computers, be they iPads, iMac, PCs or Chromebooks.

The vast majority of people use their personal computers in exactly that way, as personal devices to use when you don’t need to get work done. As some people like to point out, the iPad really is a fantastic consumption device. It’s great to read on, watch some Netflix on, chat with friends on, and even game on. Paired with an MFi controller and you’ve got yourself a, in my opinion, near perfect entertainment centre. 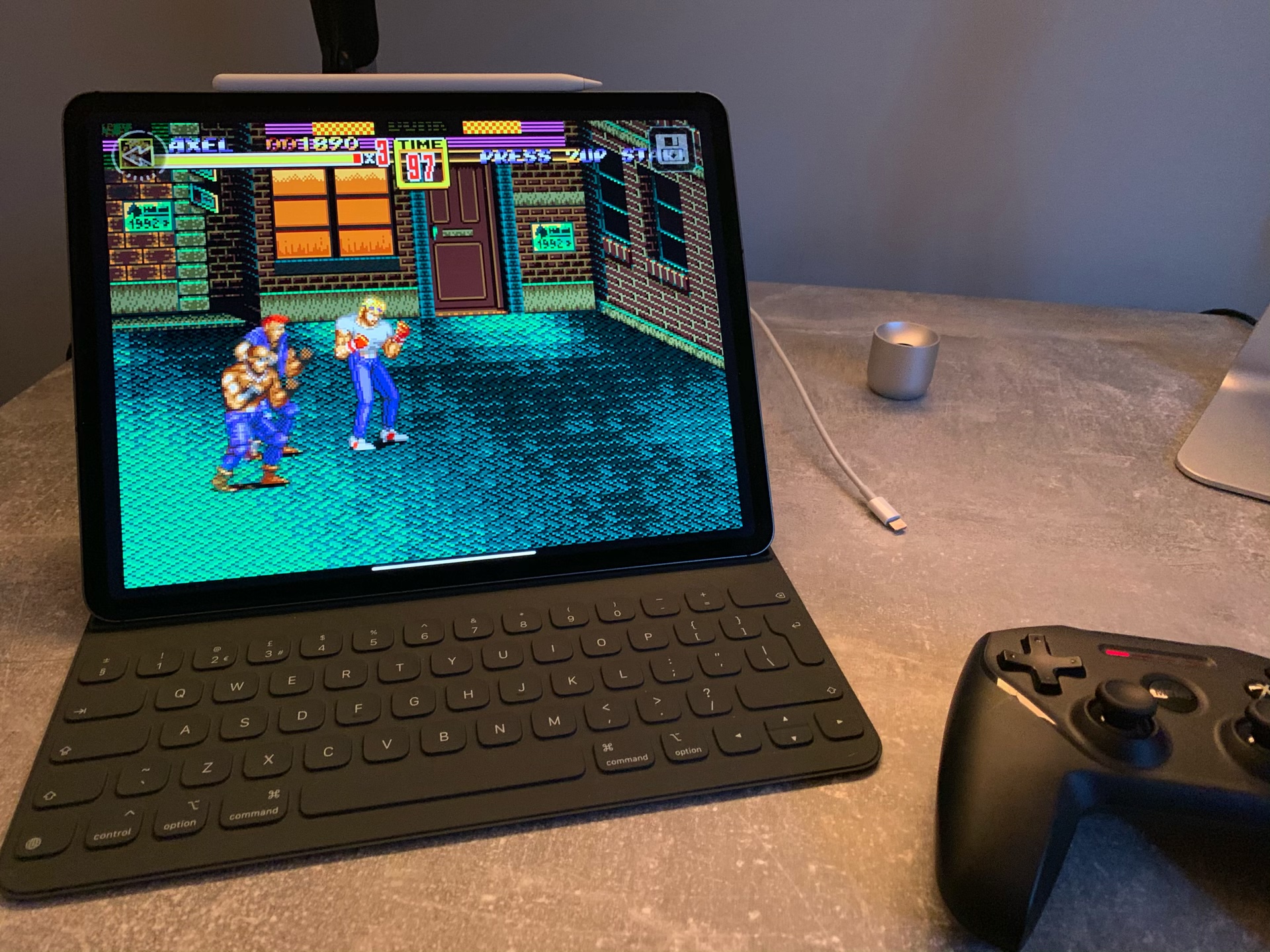 I’m going to close this article out not with my own words, but from those of Federico Viticci. I think the Tweet from him below sums up my feelings on this whole subject perfectly.

The beauty of computers is that they won’t judge you.

Use whatever computer you prefer. Use a terminal, a Mac, a PC, a phone, an iPad, a Chromebook. It doesn’t matter. The work you do matters.

Never let anyone tell you that the way you create something is wrong. Just do it.