You’ve probably read a fair few iPad Pro Reviews, most of which have walked the well trodden ground of previous iPad Pro reviews and asked the question:

“Can an iPad replace your laptop?”

Pretty much all reviews from the big named sites, such as The Verge seemed to come away with the same answer, NO. They didn’t, however, to me at least, give very valid reasons for this case. I do appreciate that reviews from an individual writer are, intrinsically, personal views. I have nothing against the fact that Nilay Patel, in his review for The Verge, could not replace his laptop with an iPad Pro. I do, however, begrudge the idea that most of these reviews put across that no one can replace their laptop for the things they want to do. I, for one, have done just that and I know many others that have also.

This review will not be a deep dive into all of the things you can’t do on an iPad. This is a review from a dedicated iPad user, for iPad users. 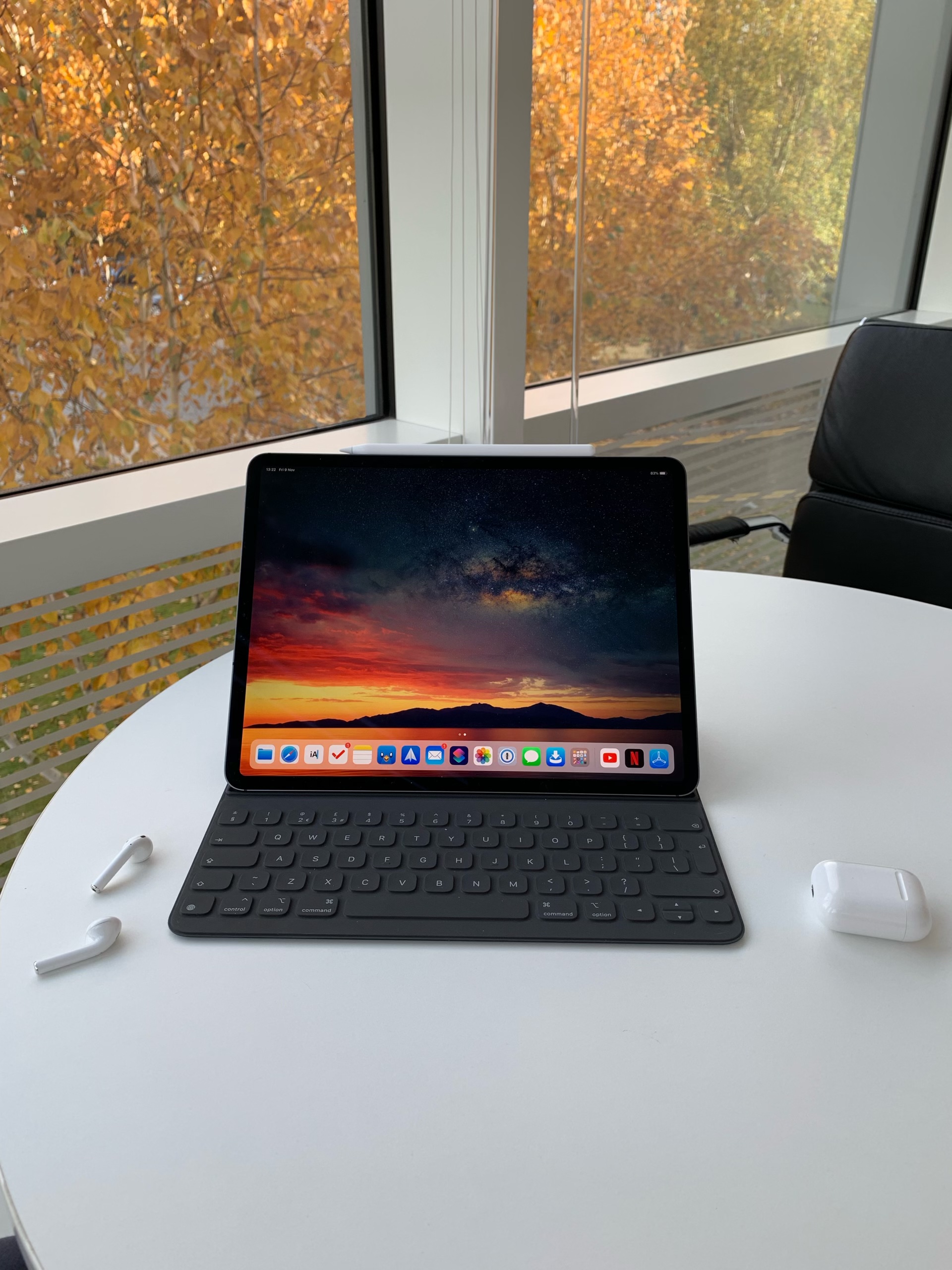 Prior to picking up the 2018 iPad Pro 12.9”, my main device was last years 10.5” model. I had the 1st generation iPad Pro 12.9” prior to that. I switched to the smaller model, originally, because while I loved the screen real estate on the larger brother, the device itself was unwieldy, heavy and just generally a bit ugly. Now that I’m fully on board with using an iPad for my personal needs (I have to use a PC at work) I was, however, on the market for the larger size again.

As soon as I removed the new 2018 iPad Pro from it’s packaging I knew I had made the right decision. The device is now unbelievably thin, and light, and the new design is truly something to behold. It feels fantastic both in the hand, and on a desk and, as always, it’s simply a joy to use.

Apple boasted an edge to edge screen and, whilst it is undoubtedly more edge to edge than previous models, it’s far from fully edge to edge like you’d see in an iPhone X or XS. The screen does, however, look amazing it it’s new form. To be able to comfortably hold this device, when not using it as more of a desktop, I don’t think the bezels really could be reduced much more than they are already, however. The design of the case itself is very reminiscent of the iPhone 5 style, which is retro and modern at the same time. Looks wise, it’s the best looking iPad Apple has ever produced. The screen technology is still LCD, and not OLED like the iPhone’s though Apple (or their screen supplier at least) have either done some amazing work on making this screen, or my eyes are just so bad I can’t really tell the difference. I think it’s a little of column A and a little of column B to be honest.

The new iPad ditches the Lightning connector and replaces it with a USB-C connection. This has been praised as opening up a greater potential for the iPad Pro to connect to a greater variety of devices, though I’m as yet to truly understand what this really opens up. I’ve connected the 2018 model, and last years 10.5” to an external and saw the same letterboxed mirrored display presented on both. I know USB-C allows for the iPad to now drive a 5k monitor, which Lightning apparently couldn’t, but right now that doesn’t equate to much. I learnt recently that iPad’s have been capable of showing something different on an external monitor to that which is displayed on the iPad, but I know of very few apps that have taken advantage of it. Whether the introduction of USB-C will change this is yet to be seen. I hold out hope it will, however. 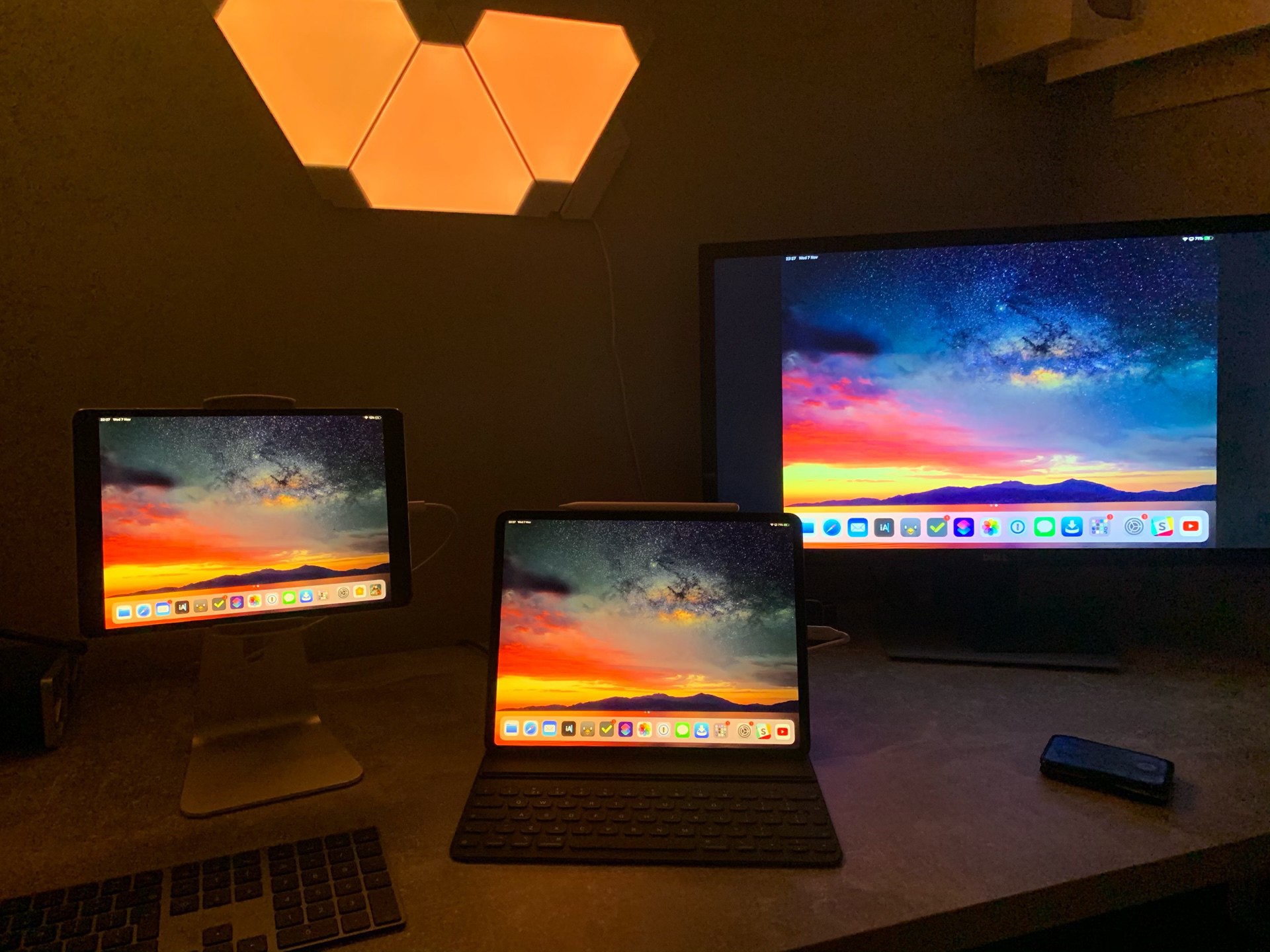 One hardware feature that I love, which i didn’t think I would, is the inclusion of FaceID. I’ve been using FaceID for some time now, in the iPhone X and now the iPhone XS Max and I’m not truly convinced that, in that case, it’s better than TouchID. It’s a fantastic system, in general, but for the way I use my phone it can be a bit of a pain. The phone is usually sitting on my desk at work and I always have to pick it up and stare at it, whereas before I could just top my finger on it to unlock and glance down. This, and other points, has been a bit iffy for me to date. FaceID on this iPad, however, seems to be a whole other story. Given the angle and way you use an iPad, the FaceID camera array seems to pick me up far better, and quicker, than ever. The viewing angle seems very good also. I can be trying on my computer at work and glance over my iPad sitting next to me and it unlocks instantly. I’m definitely now sold on FaceID, at least on the iPad. The fact you can also unlock the device by a quick double tap on the space bar is, also, very compelling. It’s one less interaction you need to do by touching the iPad at all. I appreciate it’s a touchscreen device, so touching it is of course to be expected, but it’s also very nice to navigate using keyboard shortcuts. It’s surprising just how much you can do on an iPad via shortcuts, so this is just another nice addition.

I’ve not been concerned, as yet, that I made a mistake in moving from a 10.5” to the 12.9”. This size is better for a desktop / lap situation, which I do quite a lot. It is also, however, surprisingly comfortable for use without the keyboard in a more traditional iPad setting such as on the sofa or even propped up in bed.

I had the original Apple Pencil, just because it was an interesting new accessory, but my use case for it was very limited. I’m not an artist, by even the loosest of definitions, and the fact the Pencil was always dead whenever I did have a rare use for it, and that I usually had no idea where it was, put me off even more. My use case (or lack thereof) aside for a moment the 2nd generation Apple Pencil seems to be a huge leap forward in basically every way.

The Pencil itself now has a matte finish which, along with the one flat side, make it so much nicer to hold. It’s also slightly short which makes it feel a little more balanced in the hand. It now magnetically attaches to the top / side of the device, depending on your orientation and actually charges at the same time. This is a huge improvement in my book. You can both store the device somewhere so it’s close at hand, but you can also ensure it’s always fully charged. I’ve no idea what this kind of storage method would do to such a small battery, but I would assume Apple would have thought about that and being constantly charged has to be better than being fully discharged most of the time, right?

While I am not an artist, as I’ve already said, I do find a few uses for the Apple Pencil, which this new version should make even better. One such use is, for example, when editing a podcast with Ferrite. Trying to trim and edit can be a little fiddly with your finger, but the Pencil is great at tapping around and getting really hands on with the content. The ability to, essentially, right click via the new tapping interaction on the new Pencil could be really helpful here, by providing quicker access to some useful functionality. I’m hoping that some non-drawing app developers will take advantage of this to add easy access to app features via this new input. Time will tell on this front I would imagine.

All in all, I am certainly not using this new accessory to it’s full potential, but I will be using it more and more I’m sure of it. The new design, new charging and storage method, and lack of tiny moving parts I’m likely to lose all add up to a great version 2.

I’ve mentioned in the past, both on the blog and the podcast, that I am a big fan of the original Smart Keyboard for the iPad Pro. Having tried the Brydge keyboard, and various Logitech offerings, I always came back to the original. With this in mind, any revision would have to be pretty special to improve upon it. While the change is minor, the new version does improve things in a few areas. 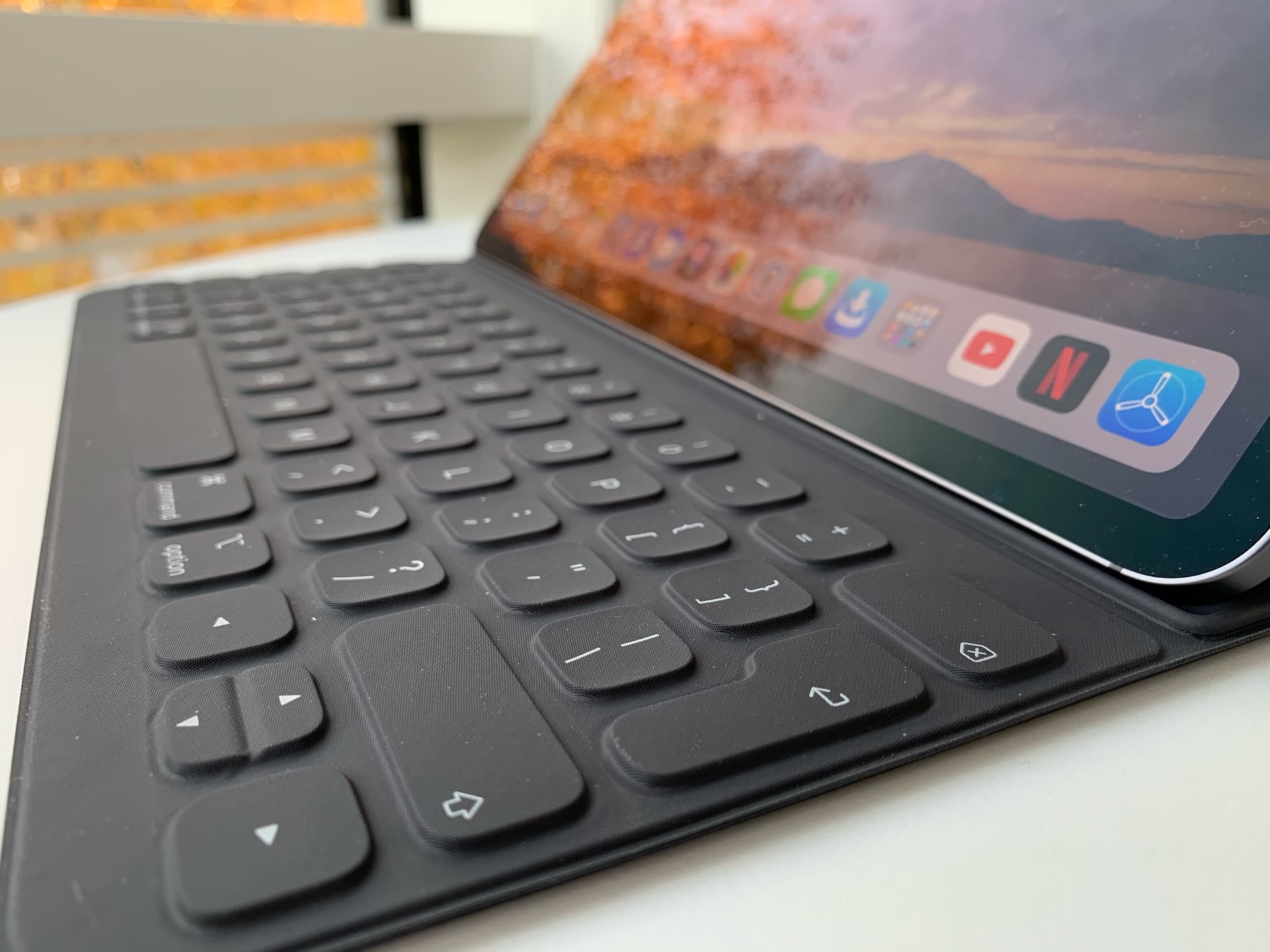 Firstly, the Smart Keyboard is, as the name implies, now a Folio, so this also now covers the back. It’s securely held in place at the back via magnets, yet it’s still very easy to pop off if you want to use the iPad without a keyboard. Because of the new design, when you fold the case over, to hold the iPad like a tablet, you touch the (now inactive) keyboard buttons at the back, which doesn’t feel great to be honest.

Along with the new style, the only other real difference is the two viewing angles that are offered. You can get a very upright ‘desktop mode’ and the original angle. The desktop mode is nice, but doesn’t offer a huge difference. More options are, however, always welcome. To me, at least, this is still the de facto iPad Pro keyboard experience. 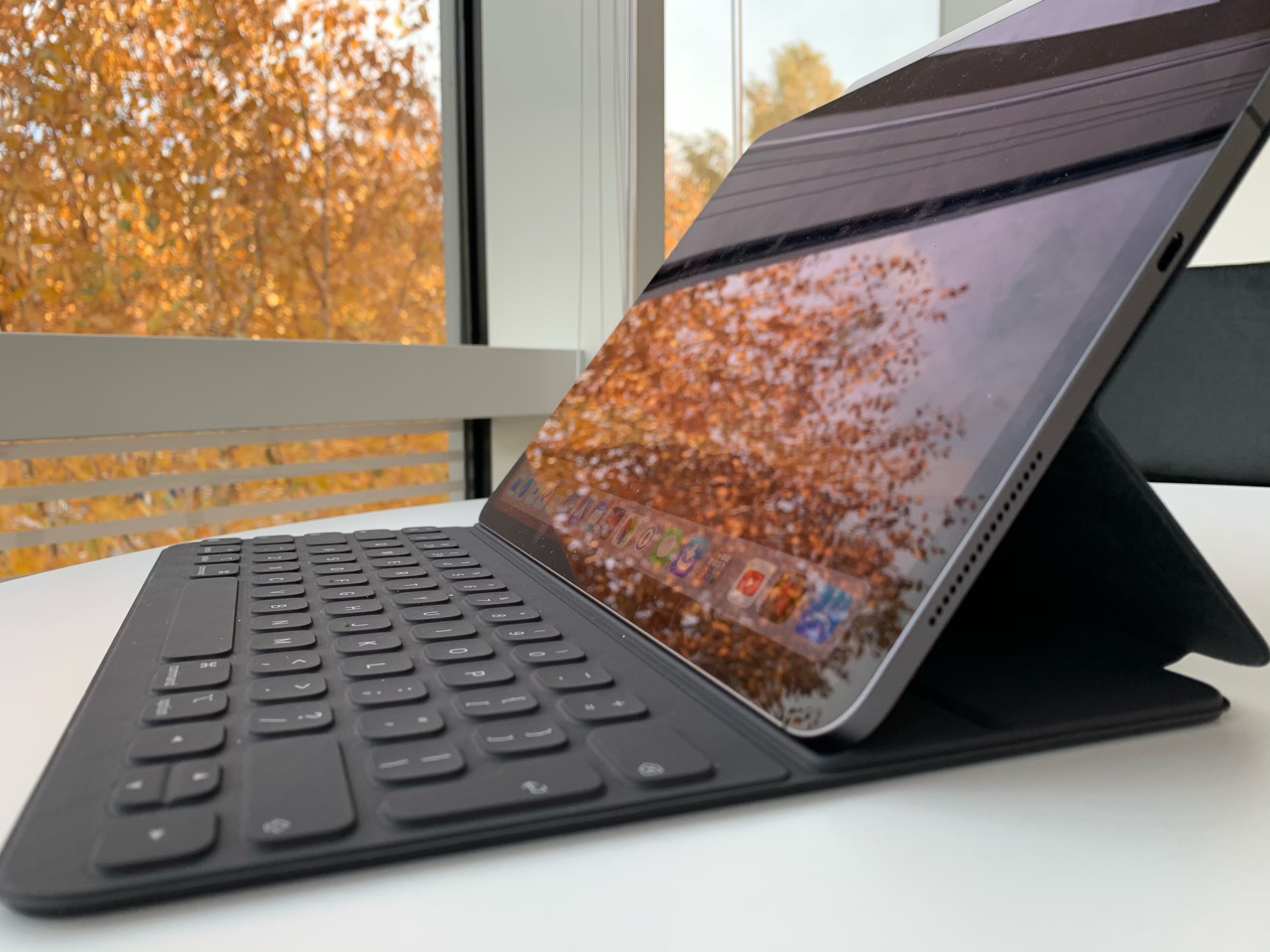 The iPad Pro’s are not cheap, by any stretch of the imagination. They are also, potentially, almost too powerful for what you can do with them right now. These two points, however, go hand in hand. The hardware is only half of the equation. Yes, they are quite expensive for a tablet, but they are also priced quite well when you consider it as a laptop. Some people like to keep telling us that you simply can’t replace a laptop with an iPad. As a blanket statement this is completely false. They are more than capable of doing this for me, and so many other people. This new, more expensive, hardware will be a hugely powerful and capable device for years to come. With this half of the equation covered, what remains? Well, the software of course. The apps available on iOS are, again for me, already way better for my use cases than anything found in competing systems. I don’t come across the same limitations others seem to find are insurmountable. With that being said, there is still a massive amount of long hanging fruit when it comes to what iOS can do for the iPad. Things such as touchpad support for taking advantage of hooking up the device to an external monitor, to better desktop / homescreen management and external storage support. A lot of the criticism thrown at the iPad as a laptop replacement seem to lead me to question if this person should be using an iPad at all. If the fundamentals of the OS don’t fit your needs, don’t use it. For the rest of us, however, I can see iOS on the iPad going from strength to strength. And while I am already not held back by the software, this amazing new hardware is opening the door to some very exciting future possibilities.

The iPad is yet to fulfill it’s full potential. It’s still in its infancy. I, for one, am loving watching it grow up and I will be there with it, every step of the way.