This post is a follow-up / addition to a post written a couple of weeks ago, called The Best Camera …. Feel free to check that article out beforehand, for a little more context).

I love photography. I love looking at beautiful works of art, on sites such as Instagram or EyeEm . On occasion, I also very much enjoy trying my hand at photography myself. While I may not be very good at it , it doesn’t stop me enjoying it. It’s my hobby.

According to Dictionary.com, the word hobby is defined as:

An activity or interest pursued for pleasure or relaxation and not as a main occupation.

Keep this in mind, it’ll be important later.

The last real camera I owned was a Canon EOS 500D . While, even at the time, it was not the newest, most powerful or generally impressive of devices, it did an admirable job, and it made me feel like a real photographer while I used it. The thing is, quite often, I found my time with the camera neither pleasurable or relaxing, so could my time using the camera really be called a hobby? My main issues with using it are as follows:

A big part of photography is the composition, which can still very much be learnt whilst using an iPhone. An image doesn’t have to be 100+ megapixels in size, or pin sharp with perfect composition to be a work of art. As Ansel Adams once said:

I often share an iPhone image to Twitter, or other social media sites, only to be greeted by the words: ‘If only you took your proper camera.’ I’m always a little thrown by this statement. Not because I’m particularly upset or concerned by the comment, but, I guess, I just don’t get it. There seems to be a feeling around that the camera makes the photo, not the photographer. The following image, taken with an iPhone, by the very talented Kim Hankskamp illustrates my point perfectly: 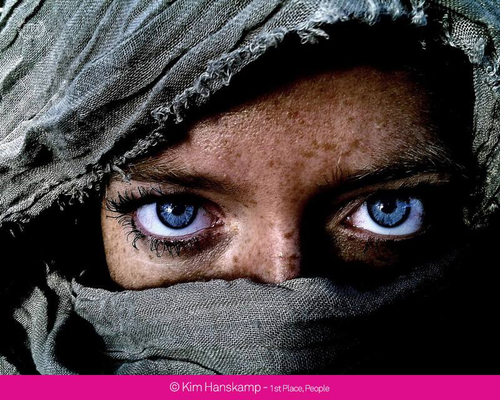 Kim’s image was awarded 1st place in the ‘People’ category in the 2013 iPhone Photography Awards, and is extremely reminiscent of a well known image of Sharbat Gula, a young Afghan girl. The image was taken by National Geographic Society photographer Steve McCurry and is undoubtedly a work of art. The image was taken in 1984, so the chances are the original negative wasn’t amazingly high resolution, yet it’s quality cannot be denied. The same can be said, in my opinion, about iPhone images. If the composition of the shot is to your liking, then the image is art. Whether anyone but you likes it is not the point at all.

My 3rd point, mentioned above, when discussing the aspects of SLR photography that frustrated me a little, was the editing required to get the most of the images. Another thing I love about iPhone photography is just how easy it is to get some very decent editing done, and these days there are some truly amazing, ‘desktop quality’ editors out there. My main workhorse is the app Darkroom which is an extremely powerful RAW editor for iPhone (there isn’t currently an iPad counterpart unfortunately). This article would be an epic to put War and Peace to shame if I listed all of the great Photo Editing options you have available to you right from the device you’re shooting from. Believe me when I say you will not be disappointed with the vast majority of the options available to you.

The camera doesn’t take the photo, the photographer does. I’m not particularly good at taking pictures with an iPhone or an SLR, but I know which one I enjoy more as a hobby. My ‘eye’ needs to be improved, there’s no question in that. This is, again, something that I can do just as well with an iPhone as I can any other, more specialist equipment. This is, of course, only my humble opinion, and the point of this article isn’t to try and convince anyone in one direction or another, though as always it’s fantastic that we have choices.

Am I less of a photographer because I use an iPhone? Quite possibly, at least in some measurements, but I can safely say that if the iPhone (or any other smartphone I may choose, don’t email me …) wasn’t such a powerful, capable camera, among many other things, I wouldn’t be a photographer (I use this term very loosely, by the way. I appreciate I am amateur to the nth degree) at all. I would not have literally tens of thousands of photos of my daughter growing up, which I treasure, or some other more traditional photos that I’m extremely proud of.